The world of condominiums is a unique form of property development and community living. It has its own cultural norms and language terms. There is also a hierarchy of authorities in condominiums. The Condominium Property Act of Nova Scotia is paramount followed by the Declaration, By-Laws and Common Element Rules in each individual corporation. A lower authority cannot contradict a higher authority.

The most common terms and their meaning in the condominium world are as follows:

Annual General Meeting – this is a requirement once in each fiscal period and is a meeting of owners. Board elections, appointment of auditors, acceptance of financial statements and question and answer sessions are normal agenda items.

Board of Directors – this is the governing body of a condominium corporation. The Board is elected by the unit owners and is accountable to the unit owners.

Budget – the Board sets an annual budget for the corporation, which comprises current expenses as well as short and long-term reserves. The budget is allocated amongst the unit owners as per the Proportions contained in the Declaration.

By-Laws – one of the constitutional documents of a condominium corporation. They are subject to the Declaration and Act.

Common Elements – a condominium corporation consists of units and common elements. Common elements are owned by all unit owners as tenants in common.

Common Element Fees – the monthly amount paid by all owners to support the budget. You cannot compare this amount from corporation to corporation unless you know what is included in this fee.

Common Element Rules – these will impact the most on owners as they dictate day-to-day living rules – where you can walk your dog, fitness room hours etc. They are often attached to the By-laws as Schedule A. They are subject to the By-laws, Declaration and Act.

Declarant – the developer of the condominium project – often but necessarily an incorporated company.

Declaration – the strongest authority in the condominium corporation subject to the Act. It establishes the boundaries of units and their unit factors.

Description – this refers to the bundle of registration documents, including survey plans and the construction plans.

Estoppel Certificate – this is a document prepared by the Board, which is a snapshot of the financial health of the corporation. It is the primary source of due diligence relied upon by a buyer or mortgage company. Once the Board signs the estoppel they are denied or estopped from not backing up the information contained in the estoppel certificate.

Exclusive Use Common Elements – certain common elements are designated as exclusive use to a particular unit by the Declaration. Examples are; parking spaces, balconies, patios and storage areas.

Insurance – there are two policies in place – the corporation maintains a master policy covering the physical structure of units and common elements and the unit owner maintains their own insurance but only covering unit improvements, contents and their own liability.

Operating Fund – this is the monthly account to which common element fees are deposited and monthly bills are paid.

Quorum – this is the percentage of unit owners that must be present in person or proxy at a meeting for the meeting to have legal authority.

Reserve Fund – a mandatory long-term reserve account that is mandated to repair and maintain the physical structure of the common elements over time. It is governed by a reserve fund study for corporations consisting of more than nine units.

Reserve Fund Study – a building assessment report projecting the repair and maintenance needs over a thirty-year period. Means a condominium corporation does not depreciate as it is continuously being rebuilt. Required by the Act for corporations consisting of ten or more units.

Special Assessment – often seen as a cash call as it is necessary if insufficient funds have been collected from the unit owners through normal common element fees.

Turnover Meeting – this is the first meeting where management and governance is turned over from the Declarant to the first Board, elected from the unit owners.

Unit – this is the condominium unit, which is purchased by the buyer. Its boundaries and allowable use is defined in the Declaration. Residential, commercial, recreational and bare land units are allowed under the Act.

Unit Factors – these percentages dictate how a unit exists in relation to all other units in the corporation. They specify; percentage common element ownership, voting percentage and, percentage cost contribution. The declaration establishes the Proportions. Their calculation method is not legislated beyond that they must equal 100%. Usually the calculation is based on unit square footage, or an equal percentage of the total.

Patrick I. Cassidy, Q.C., one of the founders of CCI-NS (reprinted from Summer 2015 edition) 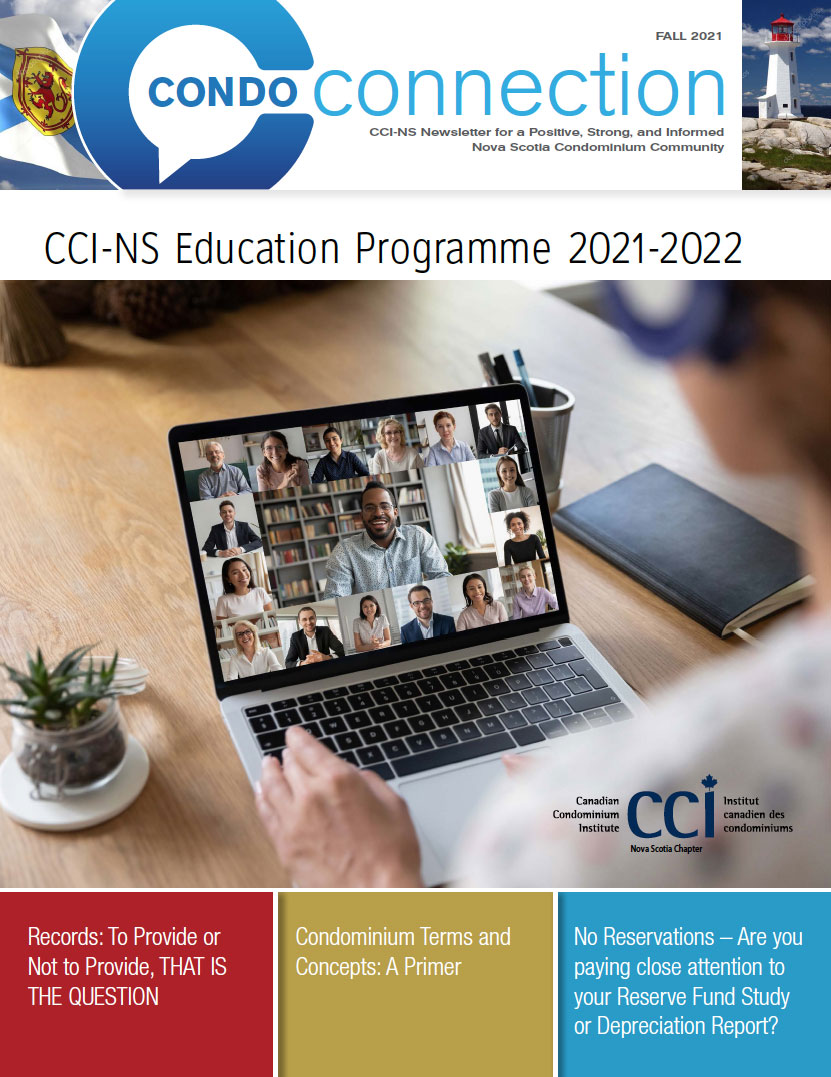